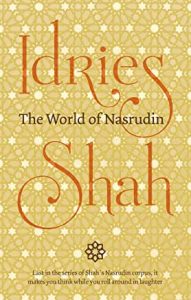 NASRUDIN’S upside down world is filled with fanatics, bigots, idiots, hypocrites, incompetents, innocents and thieves. It is a world of foible, folly and most importantly humour. It reveals the good sense and wisdom of Eastern cultures that we stereotype and assume we know. This fourth collection can be read at many levels: for fun, to shock us into thinking, to provoke our reactions and observations or for its thought patterns to register and later recognize. Apparently nonsensical and easily dismissed, is this book merely a funhouse mirror or does it accurately reflect our world, who we are, and who we might become? If you take the time to gaze into it, you may find out.

MUTUAL RESPECT  ‘Hey Nasrudin!’ called the Mulla’s wife. ‘we must hurry or we’ll be late for the mayor’s funeral.’
‘Why should I bother to attend his funeral?’ replied her husband. ‘He certainly won’t trouble to come to mine.’

SIMPLE ARITHMETIC  Nasrudin was taking his goat to market to sell. ‘Are you asking much?’ asked his neighbour.
‘Two pieces of gold,’ replied the Mulla ‘although I bought it for one and perhaps someone will buy it for three. If you would like it, I could let you have it for less.’
‘How much?’
‘Well, as we’ve established, it is worth six, but I could sell it to you for five. ‘