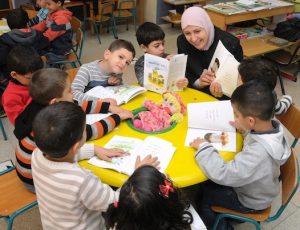 Jewish Book Week 2/26/14 Throughout Israel, 45,000 Arab children (including 100 percent of the kindergarteners) in government preschools are reading “Samsoum the Mouse” as part of a reading-readiness program called Maktabat al-Fanoos, or Lantern Library. The program, which began last month, is modeled after Sifriyat Pijama, an organization launched five years ago that distributes Hebrew children’s books to hundreds of thousands of Jewish preschoolers. Sifriyat Pijama is a sister program to the fast-growing PJ Library program in North America, which has distributed more than five million Jewish books and music CDs to over 175,000 children in the past eight years. The Lantern Library was created by the Ministry of Education in partnership with the Harold Grinspoon Foundation and Price Family Charities Fund with the goal of providing children with four books to take home and treasure over the course of the year. Next year the goal is eight books.

Just As Well I Came Along comes from Idries Shah’s book, The Pleasantries of the Incredible Mulla Nasrudin, part of a series of books with jokes, anecdotes and stories drawn from Sufi tradition.
#teachingstories #sufi #nasrudin
https://bit.ly/ISFstoryoftheday

What’s the point of a wise fool? Author Doris Lessing explained that “[Nasrudin's] antics are parallels of the mind's workings, designed to amuse the teahouses, but also for use on other levels.” Find our collection of Nasrudin stories here: https://idriesshahfoundation.org/the-mulla-nasrudin-corpus/

Clearing The Matter Up from The Subtleties of the Inimitable Mulla Nasrudin.
We hope you enjoy the story.
#teachingstories #global #wisdom #humour
https://bit.ly/ISFstoryoftheday